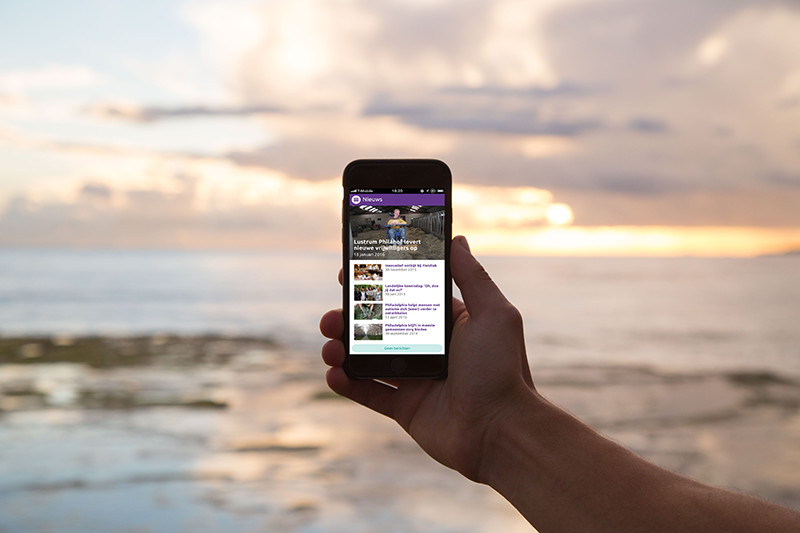 Part 1 of our blog series was about Liferay Screens and the benefits this development tool can offer organizations. This second part gives more information about Phlink, our Liferay Screens app for iOS and Android. The app is already being used with enthusiasm by healthcare provider Philadelphia and has been downloaded more than 1000 times. About 6000 sessions take place every day. Why is Liferay Screens the ideal solution for Philadelphia? And what is the added value delivered by Componence?

Using modern technology to reach employees as much as possible on the devices they use the most. This was the goal of healthcare provider Philadelphia when we met at the end of 2015 to discuss the future of the Philadelphia intranet.

Philadelphia was looking for a replacement for the existing communication solution and wanted to reach its 8,000 employees and provide them with information via a range of channels. An important requirement was that users could influence their personal digital environment themselves. The new solution also had to provide access to other applications and information sources within the same medium. The intention was to reduce the total number of applications in the architecture rather than increase this.

Philadelphia wanted to tackle mobile communication first, and only look at an alternative for a desktop or thin client after that. This mobile first philosophy led to the development of Phlink, the native mobile intranet app for iOS and Android that Componence launched at the end of June. Because specific interfaces have been developed for smartphone and tablet, the user experience is excellent on every device.

Phlink can provide Philadelphia employees with news geared to their role in the organization and information that they need for their work. It is also possible to use the app to search for colleagues and locations within the organization. That is only the beginning, as more functionalities will be added in the second phase.

Phlink is based on Liferay Screens and so fits in perfectly with the Liferay platform that Philadelphia already used. This means that there is just one management system, instead of an extra new solution. Users who are known in the portal’s SSO facility can immediately make use of the app on a one-to-one basis. They can count on a consistent and personalized user journey: from the native mobile app Phlink on their smartphone or tablet to the Philadelphia intranet on their desktop. And vice versa.

The development process was preceded by a small Proof of Concept. After all, this was a new tool and we did not want to risk having to renege on commitments later on. What was achievable? Would Liferay Screens deliver what it promised for us and for Philadelphia? After determining the functional scope of the app during several sessions with Philadelphia, we used the Proof of Concept to investigate what we could do with existing screenlets and new ones we developed ourselves. This PoC was extremely successful, as we proved within a week that Liferay Screens was the right path for Philadelphia.

We then used agile development for the actual development of Phlink. In close consultation with Philadelphia, our interaction designer developed the screens for all devices. Each sprint yielded a working app, which could be tested by both Componence and Philadelphia. By repeatedly adding functionality, it remained possible to confirm at each stage that we were still following the right path.

Componence worked with a relatively small development team consisting of 1 native iOS developer, 1 native Android developer and 2 experienced Liferay developers. The team was able to make the best possible use of our knowledge of the Liferay platform and could develop simultaneously for iOS and Android. We did not turn our attention to the responsive intranet until the final sprints, when we added a Liferay frontend developer.

Expansion and improvement of Liferay Screens

Modification of the standard screenlets available in Liferay Screens meanwhile led to expansion of the possibilities for Login, Web Content List and User Profile Maintenance. In addition, new screenlets were developed, for example for Global Search, User Search, Location Search, Comments and Rating. With these building blocks, we could provide Phlink with what Philadelphia expected of the app.

In our day-to-day development, we received fantastic support from the Liferay Screens development team. Our extensive use of the tool revealed bugs and points for improvement, which were always tackled actively by the Spanish team. The result was improvements to the code and increased stability.

The team both gave advice and took action themselves, to solve various problems including issues relating to the Login screenlet and the support of several subsites. Questions relating to the authentication and authorization for Documents & Media were also dealt with and included directly in subsequent versions. It is partly thanks to the fast answers and solutions provided by Juan Fernández, Manuel Navarro and Javier Gamarra that our innovation process was able to proceed without interruption.

With Phlink, Philadelphia is focusing in the first place on its 8,000 employees. At this moment, we are working on additional functionality such as push notifications and a calendar function, which will be added to the app during the second phase. Besides this, Philadelphia wishes to use the same technology to develop apps for clients and their families and implement these in the organization. Follow-up apps for referrers and volunteers are also among the possibilities. Componence possesses the knowledge and expertise to create native mobile apps within the foreseeable future for all these target groups, satisfying all the requirements and wishes of today’s app-users.

Head start in the development of native mobile apps

During the development of Phlink, Componence devoted a great deal of time and energy to the improvement and extension of Liferay Screens. This effort will eventually repay itself in the reusability of the screenlets we developed. Moreover, we were able to generate a clear picture of what Liferay Screens is capable of and we now have an extremely thorough knowledge of the tool. This expertise gives us an enormous head start for the development of new native mobile apps based on Liferay Screens.

🤓 User research is the unsung hero of the tech industry. Without it, we'd be building products that nobody wants or needs. But it can feel time consuming with endless surveys, focus groups, and user testing. 1/3

UX today was fun: thinking on how to work within the constrains of condition and context and then make the experience easy and pleasurable.
#ux #uxdesign #uxd

🎁 Day 1 on https://design.gifts/ is live! The first gift is a great deal from our friends at @sketch, the incredible design tool for macOS.

“The Japanese concept of omotenashi is more than just meeting the demands of guests. It’s about anticipating the needs of guests that may not be communicated in an obvious way.” Learn how to apply this technique to user-centered design — https://bit.ly/3Mz3NRk #cx #ux #design